When someone says “Cool your heels,” I don’t think they mean literally freeze your feet, which is about what the spring season wrought across most of the country with snow, wet and cool temps holding back the inevitable summer that is finally finding its way. The strangeness of the whole mess is not the late snowstorms or rain with a freezing winter mix but rather the oddity of having such events followed by 75-degree days. I’m trying to “cool my heels” as I think about all the opportunity that a year of plentiful water and good duck production might bring come fall.

The benefit of all that snow and cold rain, as waterfowlers well know, is WATER! It’s been almost five years since the northern prairies got a good drink, and it seems to have come in spades this year. Good moisture is good for ducks, and it will be interesting to hear the pond counts once surveys come out this summer. 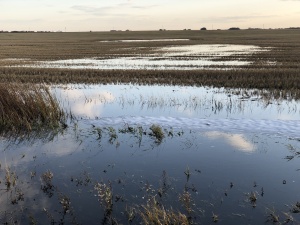 Of course, lots of water is a double-edged sword. Farmers, like my friend Ian in North Dakota, aren’t particularly fond of it, but most take it in stride, farming the low patches in dry years and going around them in wet years. It’s the corporate farms and developers that want to wage war on temporary wetlands.

“I know you like it,” Ian told me the other day while reporting that the ponds were full this spring, and he’s right. I think back to all the glorious days we’ve had on the prairie when the ponds were full, the ducks were right and the choices were many. Some amazing things can happen when you just add water.

I think about the time we targeted small dark geese, the mini-Canadas of the Central Flyway, when these birds and sheetwater were both spread across the countryside in a hodgepodge. Unlike trying to decoy 300 of these crazy, flighty geese at one time, we were able to use water sets to decoy small bunches, double and singles in what turned out to be some memorable hunts.

I think about the shock of seeing one slough covered shore to shore with gadwalls. What a strange sight. We set up on a sheetwater patch a quarter mile away and decoyed gadwalls and teal that were flying when we arrived and still flying when we departed. Repeated the game again a couple of days later too.

I think about the sodden edge of a soybean field where we sat in shoreline trees and shot mallards that came in like they owned the place, and in the process discovered a wet patch in a standing cornfield that drew mallards like flies to honey. We got permission and had one heck of a morning in the corn, at times able only to stand wide-eyed as birds attacked the spot while we waited for the dog to catch up on his work.

Of course, all of those spots also are the places where, early in spring and summer, ducks get busy with the business of raising their broods. Those temporary wetlands wouldn’t be there in a dry year, or if a farmer had tiled or ditched that spot and sent the water south. And now, as if returning to the dark ages, the federal government is going after temporary wetlands by rewriting WOTUS. Google it. You can do something about it. Oppose the action for the sake of the next generation of waterfowlers and the memories you want them to have. Support Ducks Unlimited, which is taking up the fight in Washington, D.C.