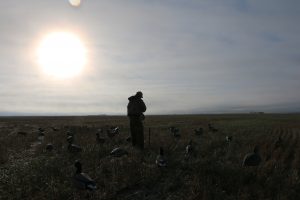 Waterfowlers in our neck of the woods have put another stinky October weather pattern in the rearview mirror. A month of 60-degree high pressure on the prairies does nothing for duck movement. Call it climate change, or not, it’s just out-and-out weird.

Warm weather has an effect on ducks that’s been really interesting to watch over the past four out of five years. Mid-season ducks now seem to avoid high-energy foods, especially corn, because apparently they generate too much internal heat. Instead, they feed on invertebrates and greens and seeds in the water, which means they don’t move much. When they do choose to fly, it’s usually nothing more than an exercise run—getting up and stretching their wings and setting back down again in the safe water. Sand Lake NWR in South Dakota, in the last week of October, reported a half million ducks on the refuge, but said, “The birds aren’t leaving the refuge much.” Granted, many of these birds are gadwalls, shovelers, wigeon and teal that don’t field feed as much as mallards, but some had to be pintails. Come late October it begs the questions: Why are these earlier migrators still in northern South Dakota? Where are the mallards?

We can always blame Canada, because parts of Saskatchewan and Manitoba had especially wet weather in the late summer, early fall. We saw this in Manitoba in early October, where swaths of grain were still in the fields, some floating, and food and water were abundantly available. Why leave Canada? Guess what? They didn’t.

I’m guessing the season is going to play out like last year again. Those in the midst of U.S. refuges with managed water and food are going to see migrants that are just about on schedule, perhaps only a bit late. The rest of the countryside is going to see nothing, until the last big surge, in which the bulk of the birds will skip the northern tier of states in favor of secured habitats and food farther south. The upper Midwest may get a week of catch-as-catch-can hunting, and then it will quickly be over. The Deep South will suffer its own new legacy.

This pattern, and it is becoming one, is less like the patterns of old and more like the patterns we saw for species like lesser scaup. Once upon a time, in the Midwest, there were giant scaup migrations that went through states like Wisconsin and Minnesota and down the Mississippi and Illinois rivers into Illinois and Iowa, where the shoot lasted about a week, before just as quickly coming to an end. In that week the word went out, the bluebill decoys were dusted off and hunters on just about any water that could float a bluebill were treated to the aerial assaults of willing scaup. No more.

Today, our mallard migration is appearing much the same. A week of falling temps, changing barometer and oncoming cold brings mallard flights into and out of an area, providing some memorable times for those at the ready, but not quite what they were in the past. And then it’s over. What’s happening to the traditions of migrating ducks? Is this the new normal?