Lately I’m feeling a bit depressed. Not all the time, not even most of the time, but every time I think about my cabin in Canada that I won’t be able to visit this spring. The Canadian government, due to the current corona virus crisis, has closed the border to non-essential visitors. I could argue that I am a landowner, that it is essential that I tend to my property, but that would be futile. I’ve crossed that border hundreds of ti 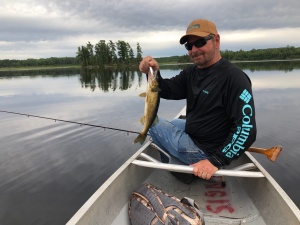 mes and know that they are particularly deaf to perceived rights of American citizens.

You see, each spring, in May and on the same exact date, I head across the northern border to visit the cabin I built decades ago on land that has been in our family for more than 100 years. It’s a roadless area, across a beautiful lake the property borders, requiring a pack-in on a crude trail followed by a lake crossing in canoe or kayak to reach the cabin.

It’s peaceful there, wild as wild can be. It’s Northwoods for sure. Bear, wolves, lynx, moose, deer, beavers, eagles, they’re all part of the neighborhood. One never knows when or where they might appear, sometimes in a sign, a track or a fleeting glimpse, other times in plain view, as if they are as surprised and interested in you as you are them. The fishing is outstanding too, but it’s the peace of the place that grabs me most of all.

The property was staked out by my great grandfather at the turn of the last century. A timber cruiser, he thought there might be a wealth of gold there, but it never came to be. No amount of gold could match what it means to me.

It’s interesting too, to think about my great grandfather at these times.  His daughter Hazel, then in her 20s with two very young children, died in the 1918 flu pandemic. What a burden to carry. The girls were raised in part by Hazel’s sister, my grandmother Rubelle. One of those young children, Eldyne, was a baby at the time that her mother passed away from the flu virus, and she would become like a second mother to me. These are the ties that bind us.

I’ll get to Canada, sooner or later and probably much later—August? September? But I’m counting on it, just as I’m counting on hunting this fall on all our usual hunting grounds. Meantime, I’m getting work done on the magazine, tackling outdoor projects I’d been putting off and spending a heck of a lot of special time with my wife and kids.

What’s interesting is, just at the time that my two kids are starting to find their parents less and less interesting, we’re now bound together at regular evening dinners with time to spare. Nobody’s rushing to get away from the table, the kids are more involved in meal preparation and cleanup and we’re finding small reasons to enjoy each other’s company—not always, but for the most part. The dog’s getting a bit more quality time from me too. All good.

God puts small blessings everywhere we look. We just have to find them.