Waterfowl hunting sits so strongly on traditions. I’ve been hunting with the same core of guys for years, and unless someone dies, God forbid, there seems to be no reason that tradition won’t continue.

We don’t have a club, we rarely see each other in the off-season, and we don’t always go to the same destination year after year to hunt. We do stay in touch. We break the season into two segments, early and late, and our goal is always to hunt twice together, though that doesn’t always happen. But the “early and late” give us a framework.

Is this sounding familiar to anyone else?

Perhaps like other friend groups, perhaps not, we each have a tolerance for the number of days we are willing to plan. I’m more or less wide open. I’ll hunt as long as anyone else wants to hunt. Others have their own limitations. One of my partners commonly says, “I’ve got four days [or five, or whatever]; that’s all I’m in for.” Putting a strict limit on things. Another partner never says anything when it comes to planning, except, “When and where are we meeting up?” He is notoriously vague and may pull out of the hunt at any time with any number of reasons or excuses. Cal 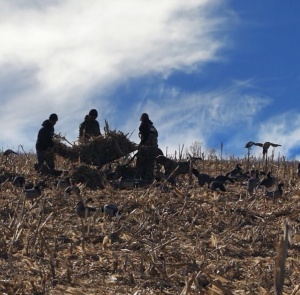 l him noncommittal. Another is dependable, but he’ll always have his own vehicle available to suit his pace. He may jettison himself from the group, but always with a heads-up and sound reasoning. There are outlier members of our group too, from time to time. All good.

We are northern hunters, so we don’t enjoy the luxury of managed wetlands and private properties that can draw and hold ducks for weeks or months in the heart of the season. It’s catch as catch can for us, like a jigsaw puzzle that never seems quite finished. Sometimes you have to move forward without those few pieces that fell on the floor and got swept away.

The biggest challenge for our group is timing our two trips. An early trip taken too late may miss opportunities on local birds. We try to avoid opening day crowds, but rather focus on local birds that are still available, perhaps in larger groups, that offer bigger rewards with less competition. It’s a fine line to walk, but when we get it right, it’s so right.

Our late-season timing is even more challenging, primarily because it’s so hard to predict weather more than 10 days in advance. We want to hit the thick of things, when new birds are arriving daily and opportunities are popping. That’s a short window. We have some tricks for estimating this, but if you’re like us, then you already know that timing has changed over the last couple of decades. Migration windows can swing wildly. We’ve seen bitter cold in the first week of November, or, in contrast, mild temps trailing into Thanksgiving.

So we make our best guesses and anchor our plans. Usually we focus on three days of hunting, perhaps four. We set the optimum days, then build the prepping and travel around that. Some of us enjoy the process; others just want to know, “Three days, when?” No matter where they fall, they are always some of the best days of the year!