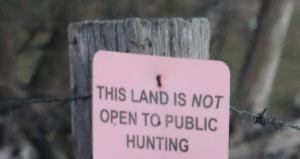 As outdoor types, and Americans, we take for granted that there will always be places to set a decoy spread, wet a line, flush an upland bird or explore the backcountry. And why not? Many states and the federal government provide us with public lands and waters that are accessible for the benefit and uses of the many. These privileges are a large part of what makes America such a great land. But lately, both overt and covert threats to these freedoms seem to be mounting.

It may be more comfortable to live in a shell, do whatever it is we do and ignore the world beyond our doorstep, but it’s not wise. Erosion begins as a slip of sand that evolves into a landslide.

Need examples of the threats? Consider the challenges to BLM lands in the West. The Bundys didn’t just want free feed for their cattle. They were backed by politicians who see public lands as a waste of space that could be developed for mining, oil, resorts and housing developments. Testing the resolve of the government and people to defend public lands served a political purpose.

Further testing the resolve of government and the American people, Bundy cohorts decided to occupy a National Wildlife Refuge.

Montanans continue to see sustained legal efforts aimed at portions of their public rivers that would mean touching the bottom with a foot or a paddle would be an act of trespass.

In a new twist, and one that takes us into uncharted waters, South Dakota has ruled that nonresident waterfowlers in 2017 may not hunt public lands in portions of the state. Whether the state actually has a legal basis for such action remains undetermined. Certainly, it has the right to restrict the number of nonresident waterfowl hunters, and has done so for decades, but the question I would ask is: Aren’t some of those public lands purchased and maintained with cost sharing from federal dollars, duck stamp dollars and perhaps even inputs from national nonprofits such as DU and The Nature Conservancy?

Arkansas also put limitations on nonresident waterfowl hunters on public lands for the coming season, but its action seems a bit less egregious in that it merely requires nonresidents to purchase a permit for specific public areas and limits the number of times they can hunt a specific area in the same season.

It’s easy to see that both South Dakota and Arkansas have refined their nonresident requirements to benefit resident hunters. And it seems reasonable that states should be able to manage their own lands (if the lands truly are their lands and not the product of federal spending) as they see fit.

But waterfowl, being protected by international treaty (and with seasons and limit guidelines established by the federal government) are not deer or pheasants. Framers of the Migratory Bird Act clearly stated their view that no state has jurisdiction over migratory birds. Is limiting public hunting on federal lands for migratory birds lawful? It would be an interesting challenge if some entity chose to take it up.