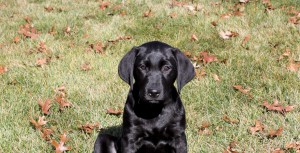 Last fall I picked up a sweet little black pup from K.T. British Labs in Elbow Lake, Minn. She was promptly named Piper by my daughter, and why not? The name is far better than anything I could think of—and came more quickly. My last Lab’s name was Buddy, so that should tell you something about my regard for dog names.

Piper is highly bred, of course, and came ready equipped with that quiet nature, soft mouth and great nose developed in her forebears. Naturally, she and I had to go through all the puppy nonsense of where and when not to poop and what is and isn’t her chew toy—including my kids’ cats.

It’s amazing how fast you forget all the work that goes into a dog. Only a little over 10 years ago I was going through these same stages with another black dog. You build on lesson after lesson and soon forget how much your dog didn’t know coming into the world, until finally, your grown hunting partner is a push-button machine that knows all the routines. For a while, and it’s never long enough, you get to enjoy a kind of hunting with your partner that’s really quite effortless.

The good news is, Piper’s a little hunter. She shows all the characteristics of her good breeding. She’s got a great nose, she’s a born retriever and she delivers to hand as if we’d trained it. She’s also extremely smart, which helps a great deal when learning new tricks from an amateur trainer. Like her predecessor, Buddy, she’s got more natural ability than I have as a trainer. And so, as usual, the only limiting factor is ME.

But there is a big difference in this dog, and me, compared to my last—this one’s a girl.

Now, I hope I’m not accused of sexism when I say that girl dogs ain’t boy dogs, but either I’ve forgotten the sensibilities of girl dogs, or my Piper is just a bit more of a girly girl than the female I raised and trained 25 years ago.

My first clue came when she piddled every time somebody bent down to pet her. My second came after a scolding when she feared coming to me for a day or two. That was puppy stuff, though, and now half grown, she’s well past those odd behaviors. But it was a good reminder that this isn’t the thicker skull of a male dog I’m dealing with.

The advantage of her “sensibility” is that Piper doesn’t require much in the way of reminding to get back to doing what’s expected. That’s a real joy. I had planned to train her with positive reinforcement methods anyway, so getting into that mode early put us on good footing. Credit all the dogs I’ve owned before her to my being able to read Piper’s nature. Sure, I’ve made plenty of mistakes with dogs, but each new dog taught me something to benefit the next generation. Piper and I are just learning how lucky we are.