Astronomers have detected a planet the size of Earth that is just the right distance from its sun to support water and, possibly, life, orbiting the nearest star to our sun, Proxima Centauri. Exoplanet researchers at the European Southern Observatory reported the discovery last week. They named the planet Proxima b.

The discovery is a significant achievement for the relatively new field of exoplanet astronomy, the study of planets orbiting stars other than our own.

Under closer observation, the researchers noted patterns of movement at intervals above the planet’s surface at first thought to be dust or particle storms, but later ruled out particulate based on random intervals and common direction. They likened the phenomenon to masses of flying creatures, “behaving almost like birds.”

Both water and land appear to dominate the planet’s surface, and they speculate that the presence of an apparent atmosphere could mean that life might exist in abundance, both on land and in water.

Imagine the implications! One day intrepid outfitters might be guiding hunters to Proxima b. The thought of it conjures pictures of what Earth once looked like—a pristine place with unimaginable landscapes littered with herds of animals and flocks of birds.

Imagine what fishing might be like! Silvery schools of sleek, naïve fishes roaming the seas and crowding the rivers, ripe for the taking.

Perhaps another Earth! The thought of it makes all our problems seem smaller. It means, perhaps, that the author Thomas Wolfe was wrong when he inferred, you can’t go home again. The discovery of this familiar planet off the shoulder of Proxima Centauri may be the home we recall and idealize.

Alas, what I have written here is greatly embellished. A planet was 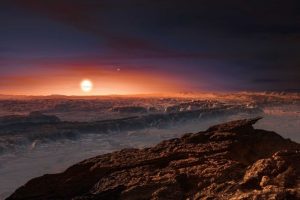 discovered off Proxima Centauri, and it is a “Goldilocks” planet, perhaps capable of sustaining life. But even if we could go there, we would not recognize it. Proxima Centauri is a red dwarf star, smaller than our sun. One would not enjoy blue skies on Proxima b, because the sky would most likely appear red. The planet has an annual orbit of 11 days, as opposed to our 365 days, and is thought to have strong radiation that would suggest a climate quite different from that of Earth. Proxima b is 25 trillion miles away.

Nonetheless, the discovery set off a wave of excitement in media outlets, fueled in no small part by a commissioned painting of a beautiful sunrise over a rocky, cloud-swept Proxima b. It’s a beautiful piece of imagination, nothing more, but it reflects the excitement all humans seem to share in the dream that somehow we will find another Earth, a perfect unblemished Earth.

The so-called science of exoplanet research seems a great misdirection. Proxima b, researchers say, is the most Earthlike of the planets they have found, yet it appears to be nothing like Earth. Perhaps our yearning for another Earth would better be focused on the Earth we call home, before war, overpopulation and damage to our natural resources render it nothing like the Earth of our dreams.